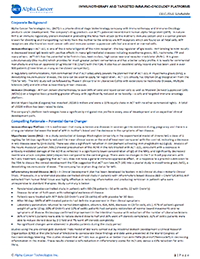 Immuno-Oncology AFP can deliver chemotherapy on a targeted basis to cancer cells and to suppressor cells which provides greater efficacy with significantly reduced or no toxicity.

Bristol-Myers Squibb is a 14% equity shareholder with no other commercial rights.

The company has a significantly mitigated risk profile in every area of development and an expedited clinical development path.

It is well-known that autoimmune diseases in women typically go into remission during pregnancy and there is a strong correlation between the level of AFP in mother’s blood and the decrease in the symptoms of her disease. In preclinical models of MG, AFP was able to block the MG antibodies from attacking the ACh receptors on the muscle.

AFP safely does this by binding to FcRn receptors thus reducing levels of toxic IgGs resulting in clearance of IgGs from circulation.

ACT-101 has the potential to be first-to-approval, high value FcRn antagonist. Its mechanism of action (MOA) is the same as other clinical candidates. It is delivered subcutaneously (subQ) which provides for much greater patient convenience. It is ready for commercial manufacture and has an approved drug master file (DMF). It has an excellent safety record and has been used in over 300 subjects (three times as many as the closest competitor).

In Oncology AFP is a carrier protein known for transporting nutrients to rapidly growing fetal cells and also acts as an immune regulatory protein involved in the protection of the fetus from attack by the mother’s immune system. Only trace amounts of the protein are found following the fetal stage but receptors for AFP show up again on almost all solid and liquid cancer cells. The company uses AFP to deliver a chemotherapy payload to selectively kill cancer cells and immune suppressor cells. Lower toxicity of this targeted approach offers the ability to treat the patient more frequently until the patient is cancer free.

ACT has several lead products that include non-covalently bound chemotherapy (paclitaxel, thapsigargin) and chemically linked chemotherapy such as maytansine. In addition to proven efficacy and known safety profile of generic chemotherapy drugs, AFP itself has been proven as safe as placebo in over 300 patients in Phase I and II clinical studies. ACT’s products are being developed as a treatment for multiple cancer indications as almost all cancer cells (>80%) express AFP receptors and healthy cells do not.

Fill out this form to receive the latest updates, news, and press releases from Alpha Cancer Technologies.

You can unsubscribe at any time by clicking on the unsubscribe link at the bottom of our emails.