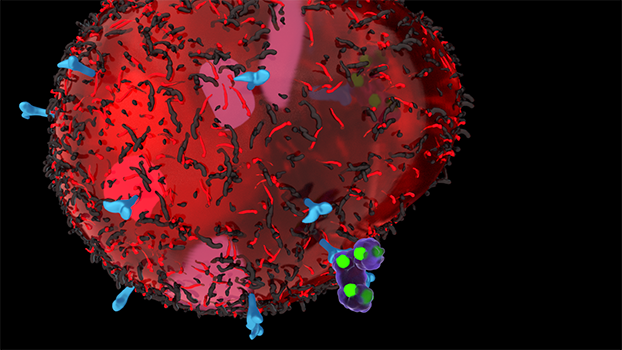 Effect of ACT-903 Conjugate on Survival

Highlights From The Study

ACT has identified the ACT-903 conjugate with the strongest efficacy profile and will advance the program into further studies to support a Phase 1 clinical trial. 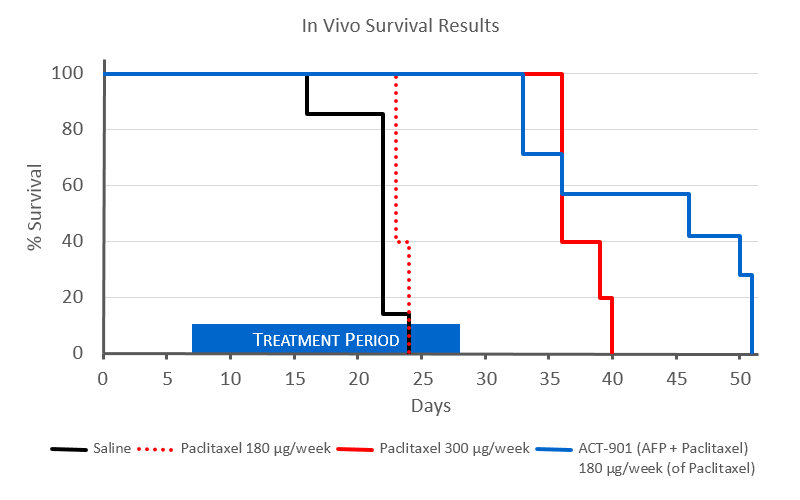 In this study several groups of mice were treated with various doses of paclitaxel (Taxol®) or ACT-901 (AFP + paclitaxel). The black line shows the control group that was given only saline. All mice were dead by day 24.

The 2 red lines show survival of mice given low (dotted red line) or high (solid red line) of paclitaxel. Low dose paclitaxel had no effect and did not improve survival rates.

There was also significant vein sclerorsing in the high paclitaxel group but not in the ACT-901 (AFP + paclitaxel) group.

Presented at the European Society of Clinical Oncology (September 2021)

During the study, four novel AFP-maytansine conjugates of differing drug-protein ratios and slightly different linker structures were administered intravenously (IV) to mice bearing human colon carcinoma (COLO-205) xenografts, at doses previously determined to be safe. Seven days after implantation, mice with tumors greater than 150 mm3 were randomized to receive control or one of the four conjugates (10 animals/ group). Best response group shown below. Animals were treated daily for two weeks with two days of rest after five doses and tumor volume was assessed twice weekly for 60 days following implantation. 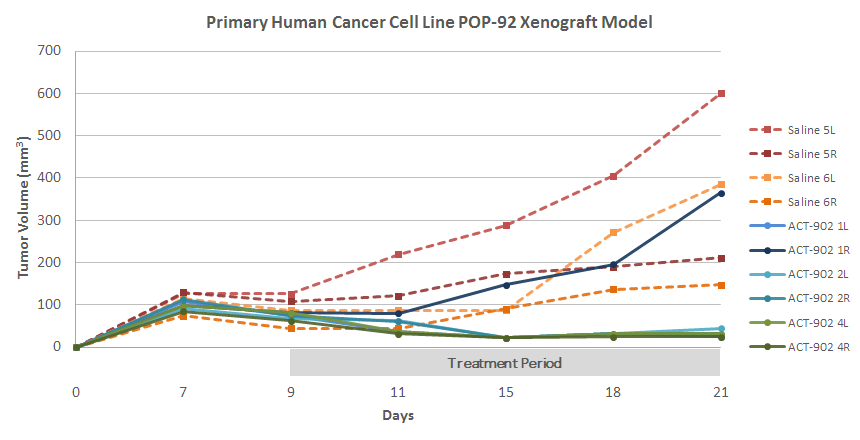 In this study 2 groups of mice were treated with saline (control group) or ACT-902. Dotted lines show individual tumor volumes in control mice. All mice were dead by day 24.

Solid lines show changes in tumor volumes of mice treated with ACT-902. 5 out of 6 ACT-902 treated tumors show complete regression of tumors by day 7 of treatment with no further growth thereafter. One tumor was unresponsive and continued to grow.

It should be noted that POP-92 cancer cells are from patient with BRAF mutated colorectal cancer. This type of cancer is highly resistant to chemotherapy resulting in poor prognosis for patients with this cancer type. 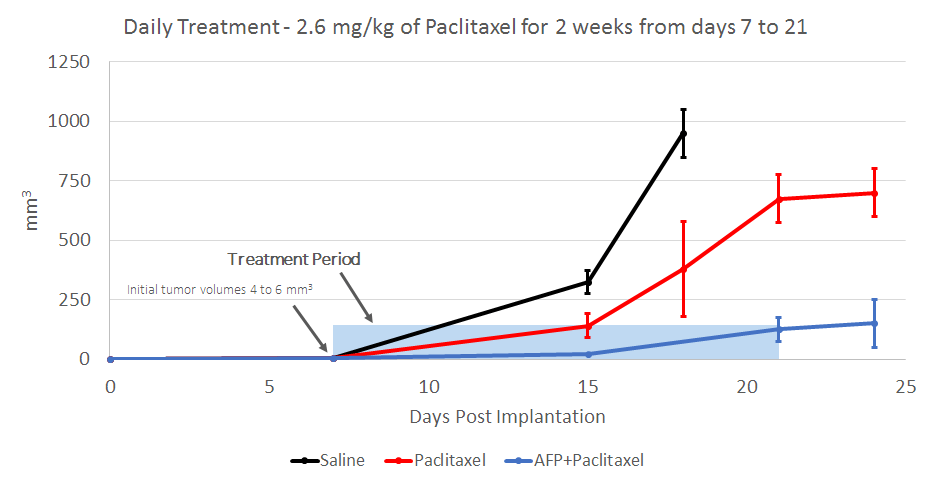 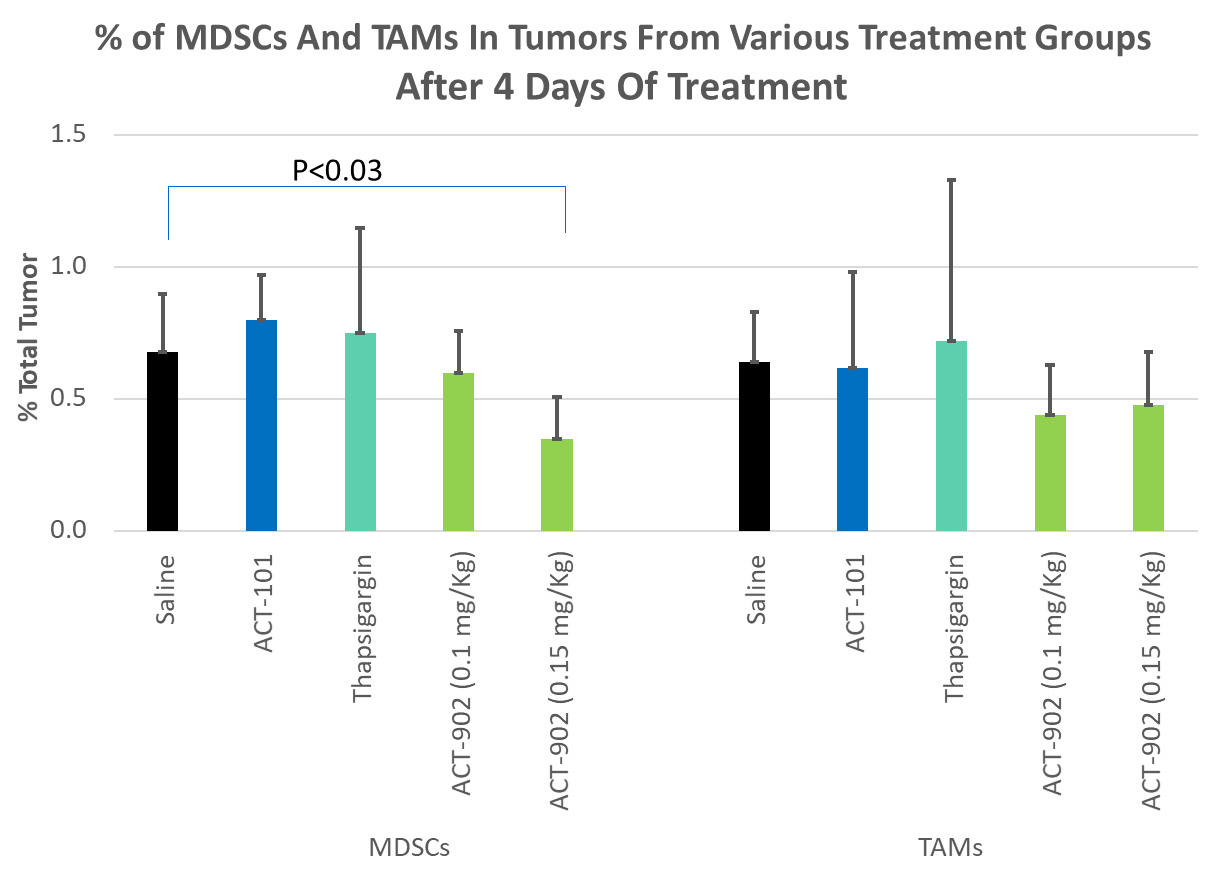 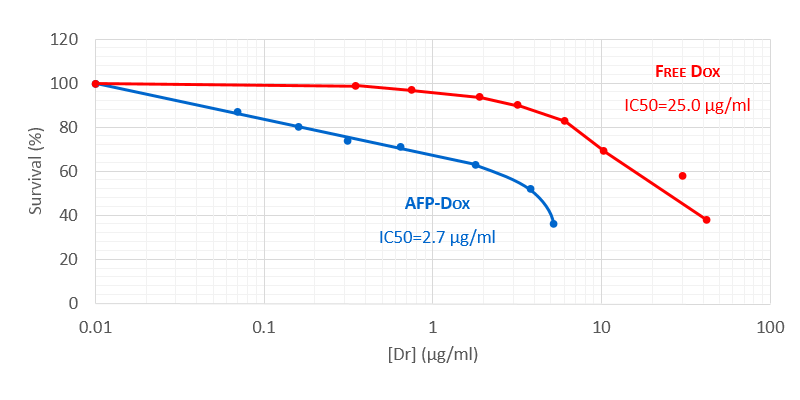 A study on chemo-resistant ovarian carcinoma cell line SKVLB demonstrated that is takes 10 times more dox to kill 50% of the cells in the resistant cell line than with AFP-Dox which seems to be able to overcome the resistance by binding to receptors found on the resistant cells and transporting dox directly into the cell bypassing the cell membrance pumps.